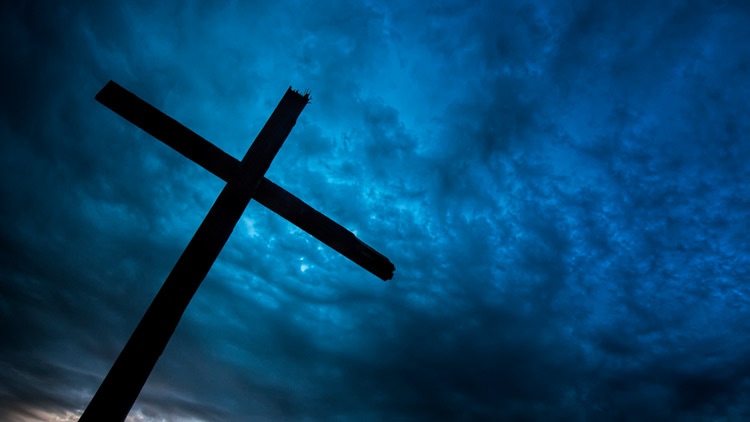 When Jesus had received the sour wine, he said, ‘It is finished,’ and he bowed his head and gave up his spirit.
John 19:30

The events surrounding Jesus’ death were largely routine motions of Roman jurisdiction. The trials, the beatings, the humiliating procession, and the painful crucifixion were all a part of business as usual for soldiers involved in executing criminals. What wasn’t routine, though, was the darkness that descended over the whole event in the middle of the day (Matthew 27:45), as though God had closed His eyes on the sorrowful scene. This was both a routine execution and the greatest turning point in all eternity.

What made it so important was the identity of the man hanging on the middle cross: none other than God incarnate. Our minds should never cease to be amazed by this:

Well might the sun in darkness hide,
And shut its glories in,
When Christ, the mighty Maker, died
For man the creature’s sin.[1]

Scripture does not place much emphasis on Christ’s physical sufferings on the cross. He surely did suffer grievous physical pain, but “the sufferings of his body were nothing to the sufferings of his soul; these were the soul of his sufferings.”[2] Jesus fully experienced all of the pain and agony of being separated relationally from God the Father—physically, mentally, and spiritually. Whatever you face in your life, know that Jesus has gone through worse and therefore understands how you feel. Not only that, but the unimaginable anguish He endured was for you. Only when the time was right did Christ triumphantly proclaim, “It is finished”—tetelestai: the debt is satisfied and done with.

Christ’s crucifixion is often portrayed with the cross erected high above the onlooking crowd. In reality, though, once the cross was lowered into its setting, His feet were likely very close to the ground. In the same way, Christ’s life, death, and resurrection do not stand high above our lives but intimately close to them. No, Jesus’ death was no ordinary death, but rather a death that promises to give, through faith, true life. Everything changes when we consider all that took place on that cross and say to ourselves:

7Then came the day of Unleavened Bread, on which the Passover lamb had to be sacrificed. 8So Jesus1 sent Peter and John, saying, “Go and prepare the Passover for us, that we may eat it.” 9They said to him, “Where will you have us prepare it?” 10He said to them, “Behold, when you have entered the city, a man carrying a jar of water will meet you. Follow him into the house that he enters 11and tell the master of the house, ‘The Teacher says to you, Where is the guest room, where I may eat the Passover with my disciples?’ 12And he will show you a large upper room furnished; prepare it there.” 13And they went and found it just as he had told them, and they prepared the Passover.

14And when the hour came, he reclined at table, and the apostles with him. 15And he said to them, “I have earnestly desired to eat this Passover with you before I suffer. 16For I tell you I will not eat it2 until it is fulfilled in the kingdom of God.” 17And he took a cup, and when he had given thanks he said, “Take this, and divide it among yourselves. 18For I tell you that from now on I will not drink of the fruit of the vine until the kingdom of God comes.” 19And he took bread, and when he had given thanks, he broke it and gave it to them, saying, “This is my body, which is given for you. Do this in remembrance of me.” 20And likewise the cup after they had eaten, saying, “This cup that is poured out for you is the new covenant in my blood.3