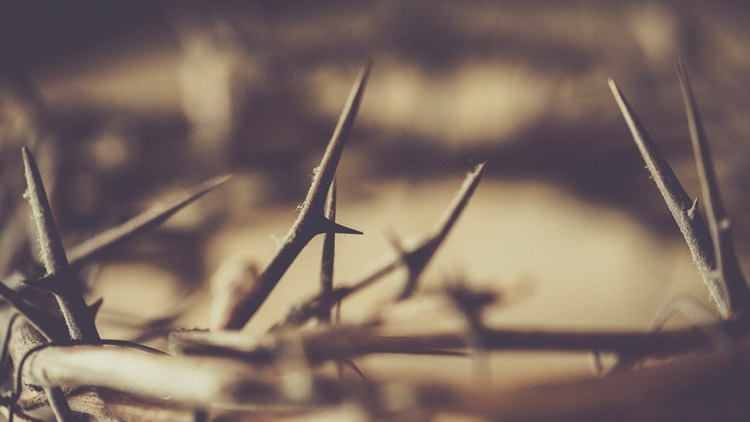 Jesus came out, wearing the crown of thorns and the purple robe. Pilate said to them, ‘Behold the man!’
John 19:5

There Christ stood—His head pierced with a crown of thorns, dressed up in another’s clothes, forced to hold a reed as a scepter, all in mockery of His kingship—as the Roman governor Pilate declared to the jeering crowd, “Behold the man!” While he spoke those words with scorn in mind, they were ironically appropriate; there stood the Savior of the world, arrayed in unparalleled humility, adorned with a lavish love for the world.

We have much to learn from Christ’s example. As the humble King endured royal ridicule and the “pre-death death” of brutal flogging, He did not utter a word of self-defense. And for what did they condemn Him? For healing a woman who was crippled for 18 years (Luke 13:10-13)? For bringing back to life the widow of Nain’s dead son (Luke 7:11-17)? For bringing Lazarus forth from the grave (John 11:1-44)? For taking children on His knee and encouraging His disciples to understand that “to such belongs the kingdom of heaven” (Matthew 19:14)? On what basis did Christ’s accusers find it in themselves to abuse Him in this way? There could be none. But they did it anyway.

When our humble Lord remained silent during His numerous trials, Pilate took offense and felt disrespected. There is great irony here, as this Roman governor attempted to pull rank on the King of the universe! And all the while, that King did nothing to assert His authority or save His own life. He humbly suffered an unjust trial, spoke truth when asked questions, and walked forward even unto death, all on our behalf.

Do I understand why He went down this road of humiliation? “Oh, the love that drew salvation’s plan”[1]—love and salvation for you and me! Two millennia ago, there stood a sorry spectacle outside the governor’s palace, in part because Jesus had our names before His gaze—names He had graven on the palms of those hands that would be pierced by the cruel nails (see Isaiah 49:16).

May we never be like the riotous crowd, mocking Christ’s humility, nor like Pilate, looking for Christ to be impressed with us. Instead, behold this Man in all His humility—holding this reed, bearing this crown, wearing this costume, hanging on that cross—and see Him beckoning. Behold the Man, and know beyond all doubt that His love for you knows no end.

He Was Pierced for Our Transgressions

13Behold, my servant shall act wisely;2

he shall be high and lifted up,

and shall be exalted.

14As many were astonished at you—

his appearance was so marred, beyond human semblance,

and his form beyond that of the children of mankind—

15so shall he sprinkle3 many nations;

kings shall shut their mouths because of him;

for that which has not been told them they see,

and that which they have not heard they understand.

1Who has believed what he has heard from us?1

And to whom has the arm of the Lord been revealed?

2For he grew up before him like a young plant,

he had no form or majesty that we should look at him,

and no beauty that we should desire him.

3He was despised and rejected2 by men;

a man of sorrows,3 and acquainted with4 grief;5

and as one from whom men hide their faces6

he was despised, and we esteemed him not.

4Surely he has borne our griefs

and carried our sorrows;

yet we esteemed him stricken,

smitten by God, and afflicted.

5But he was pierced for our transgressions;

he was crushed for our iniquities;

upon him was the chastisement that brought us peace,

and with his wounds we are healed.

we have turned—every one—to his own way;

and the Lord has laid on him

the iniquity of us all.

7He was oppressed, and he was afflicted,

yet he opened not his mouth;

like a lamb that is led to the slaughter,

and like a sheep that before its shearers is silent,

so he opened not his mouth.

8By oppression and judgment he was taken away;

and as for his generation, who considered

that he was cut off out of the land of the living,

stricken for the transgression of my people?

9And they made his grave with the wicked

and with a rich man in his death,

although he had done no violence,

and there was no deceit in his mouth.

10Yet it was the will of the Lord to crush him;

he has put him to grief;7

when his soul makes8 an offering for guilt,

he shall see his offspring; he shall prolong his days;

the will of the Lord shall prosper in his hand.

11Out of the anguish of his soul he shall see9 and be satisfied;

by his knowledge shall the righteous one, my servant,

make many to be accounted righteous,

and he shall bear their iniquities.

12Therefore I will divide him a portion with the many,10

and he shall divide the spoil with the strong,11

because he poured out his soul to death

and was numbered with the transgressors;

yet he bore the sin of many,

and makes intercession for the transgressors.