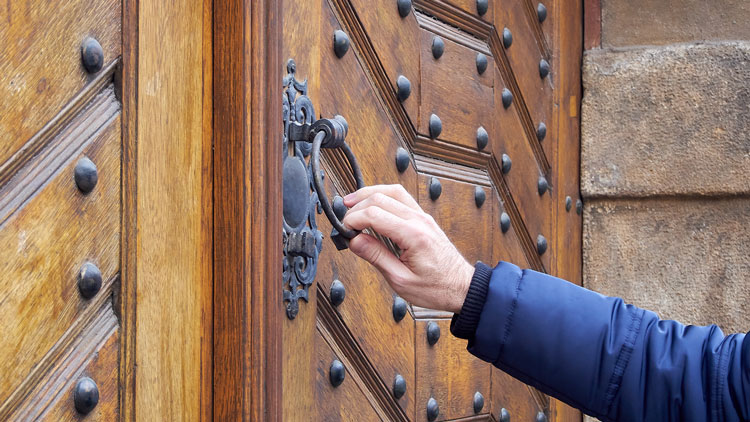 Which of you who has a friend will go to him at midnight and say to him, “Friend, lend me three loaves, for a friend of mine has arrived on a journey, and I have nothing to set before him” … I tell you, though he will not get up and give him anything because he is his friend, yet because of his impudence he will rise and give him whatever he needs. And I tell you, ask, and it will be given to you.
Luke 11:5-9

It’s tempting to think that talking about God is the principal expression of our relationship with Him. It’s possible, though, for us to talk about God without any intimate knowledge of who He truly is. Evidence of our personal relationship with God is often found not in our public words but in our private prayers—not in what we say about Him but in what we say to Him. Indeed, as Robert Murray M’Cheyne was said to have observed, “What a man is on his knees before God, that he is—and nothing more.”

Therein lies a challenge! Because if we’re honest, many of our prayers reflect a static or distant relationship, not the dynamism that should mark a warm friendship. But if this is true of us, then we can be assured that we are not alone. Jesus’ disciples also desired to grow in intimacy with their heavenly Father but knew they needed the Lord to teach them how to do so (Luke 11:1)—and by way of answer, Jesus, having outlined what came to be called the “Lord’s Prayer,” told them a parable about a friend’s bold request.

Jesus begins His illustration by establishing the relationship of the two men within His story: they are friends. He then continues to explain how the one man, wishing to show hospitality to a traveling guest, goes to the other’s home at midnight to borrow bread. He even risks waking his friend’s entire family just to make his request. Because of his bold persistence, Jesus says, the second man rises and gives the first what he needs.

What we need to grasp from Jesus’ story is this: if a sincere human friendship produces such a generous response, we can rest assured that God will never refuse us anything we truly need when we come to Him in prayer. The man’s request is a bold one, but as demanding as it may seem, it is heard by a friend and answered because of his persistence. How much more, then, can we be absolutely confident that our heavenly Father is prepared to respond when we approach Him with a sincere, humble heart.

Assurance before God is not necessarily presumptuous. Rather, we can have confidence before His throne because of the friendship He has established with us through Jesus. Because of Him, we can speak to our Creator with the “impudence” of a close friend. What a thought! There is no midnight with God, nor will there ever be a moment when He is inconvenienced by our coming to Him as our Friend. All we must do is knock.

15For this reason, because I have heard of your faith in the Lord Jesus and your love6 toward all the saints, 16I do not cease to give thanks for you, remembering you in my prayers, 17that the God of our Lord Jesus Christ, the Father of glory, may give you the Spirit of wisdom and of revelation in the knowledge of him, 18having the eyes of your hearts enlightened, that you may know what is the hope to which he has called you, what are the riches of his glorious inheritance in the saints, 19and what is the immeasurable greatness of his power toward us who believe, according to the working of his great might 20that he worked in Christ when he raised him from the dead and seated him at his right hand in the heavenly places, 21far above all rule and authority and power and dominion, and above every name that is named, not only in this age but also in the one to come. 22And he put all things under his feet and gave him as head over all things to the church, 23which is his body, the fullness of him who fills all in all.