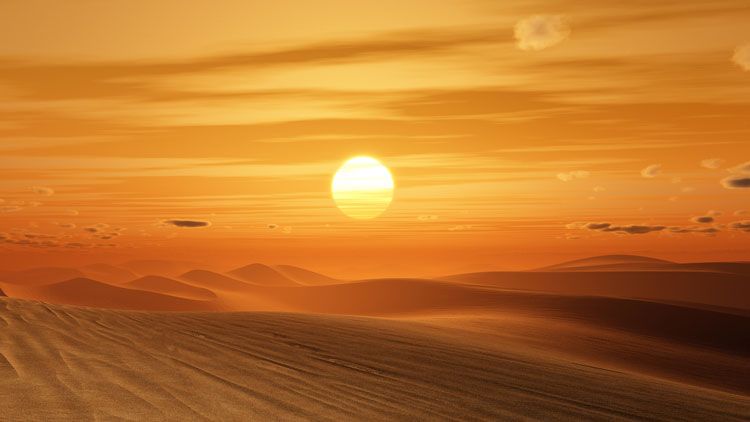 “It is enough; now, O Lord, take away my life, for I am no better than my fathers.” And [Elijah] lay down and slept under a broom tree. And behold, an angel touched him and said to him, “Arise and eat.”
1 Kings 19:4-5

All of us have surely found ourselves in a spiritual valley when we expected to be on a mountaintop. Perhaps when we least anticipated it, physical fatigue set in, or we received discouraging news, or a besetting sin returned to plague us. Troubling circumstances in our lives often converge, precipitating a change from faith to fear.

The prophet Elijah found himself hiding in the wilderness largely because his focus had changed: he had started to look at God through his circumstances rather than looking at his circumstances through God. He had magnified his life’s difficulties, and it paralyzed him. As he began to walk by sight instead of faith, his peace was disrupted and his spiritual prosperity was eroded.

Elijah had fallen into the “self” trap. Focusing on the many failures of the Israelites towards God, he had fallen prey to the notion that he was the only one who was serving God (1 Kings 19:10). His faith and hope were replaced by discontent and a lack of peace. In self-pity, he ran away to the desert, lying down on the job under a broom tree, praying to die. Yet instead of judging him or chastising him, God came to Elijah and refreshed him with food and drink, preparing him for the journey ahead. With a gentle whisper, the Lord then revealed Himself afresh to His downcast servant and reinstated him, giving him a whole new list of duties to perform (v 4-16).

During trying times, we often allow self-pity to settle in. We begin to think we are the only one who is facing such trials. Some of us may relate to Elijah’s experience; the Lord used us greatly, and we had influence for the gospel in the past, but, for whatever reason, we’re now a long way from that mountaintop. God may let us get so low—but he never leaves us there. As the angel was with Elijah when he was in his valley, so God’s Spirit is with us in ours.

If you find yourself in the desert, don’t just find a broom tree to lie down under. Don’t assume your best days lie behind you. God has a purpose for you and me. He completes what He begins (Philippians 1:6). Be refreshed by the reminder of God’s presence and press on in the work He has called you to.

Treasure in Jars of Clay

7But we have this treasure in jars of clay, to show that the surpassing power belongs to God and not to us. 8We are afflicted in every way, but not crushed; perplexed, but not driven to despair; 9persecuted, but not forsaken; struck down, but not destroyed; 10always carrying in the body the death of Jesus, so that the life of Jesus may also be manifested in our bodies. 11For we who live are always being given over to death for Jesus' sake, so that the life of Jesus also may be manifested in our mortal flesh. 12So death is at work in us, but life in you.

13Since we have the same spirit of faith according to what has been written, “I believed, and so I spoke,” we also believe, and so we also speak, 14knowing that he who raised the Lord Jesus will raise us also with Jesus and bring us with you into his presence. 15For it is all for your sake, so that as grace extends to more and more people it may increase thanksgiving, to the glory of God.